The clue is in the name… this is a unique place on “The Borders” between France and Spain.  Although only part of this urban sprawl is Els Limits; the other part is Le Perthus.  These two towns are joined at the hip, that hip being the border which runs through part of the main street.  The photo headlining this post gives a clear illustration of that: the postbox is in Spain and the parking meter is in France.

The Treaty of The Pyrenees decided on the exact border between the two countries through the mountain range, which included this particular area. 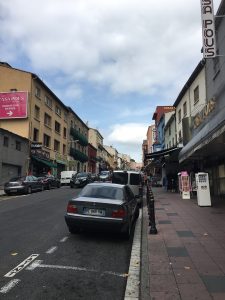 I was standing on the border itself when taking this picture.  In this part of the main street, the entire left hand side and entire roadway is in France.  The pavement on the right hand side is Spanish.  So, by opening a door towards the pavement, that door is in another country (I’m sure that’s easily worked out in insurance claims).

Free movement in Europe is so clearly illustrated here, with the single urban area enjoying a seamless transition from one place to the other.  However, not everything is harmonised here; alcohol and tobacco can be considerably cheaper on the Spanish side than in France.   Just south of the main street there is a customs post but as with much of the Schengen free movement area, it’s not routinely staffed.

The border, which doesn’t take a directly straight route through the town(s) is marked in places, so you can be sure where you are at any given moment, should you need to.