Ah, Venice.  118 little islands making up this unique, iconic city in northeastern Italy.  It is one of those must-see places on many travel lists.   Finally, this Easter, I got to tick it off mine.

This was always planned to be a little Easter weekend trip.  “Don’t go at Easter!” many written guides exclaim, presumably referring to the big crowds.  I didn’t think I’d be punishing myself – far from it – with a cheeky 48 hours from Maundy Thursday morning to Easter Saturday evening.  This is how it went.

My flight of choice was British Airways Club Europe.  Whilst the seating for much of the cabin is the same as in economy, it’s the use of the Club lounge at the airport that’s a significant benefit (assuming you don’t get already get lounge access from some other status) and I managed to grab a seat in row 1 for this trip.  Great legroom but my top tip is to be careful where in this row you sit, to avoid getting bashed by suitcases and people.  Not blaming them – it’s a tight fit.  One side of the row sticks out into the aisle more than the other.

There are mixed views about BA’s short haul business class service.  Actually that’s an understatement and really it depends on what you personally value on a flight and whether you think you get that.  For me it all came together quite nicely on the outward journey.  I will miss the really handy table that is in the middle seat – it is planned to be phased out soon.

On arrival I headed straight for the hotel on the mainland, checked in and was straight out the door to get on the bus to Venice.   The bus quickly heads off across the causeway – the Ponte della Libertà (“Bridge of Liberty”) and is at the main bus station in a few minutes.  Of course, the journey itself is spectacular, especially for the first-time visitor, so that was worth the inexpensive bus fare (24 hour tickets are available, which is very useful for quick visits if timed right). 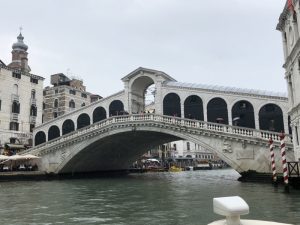 Most of day 1 was spent exploring the Grand Canal and sights close to it, using the water buses that I found to be efficient and good value.  Clearly these are a primary form of transport in the Centro Storico, so it’s vital that they work well.  After passing under the world-famous Rialto Bridge, it was off to St Mark’s Square, a key tourist focal point.  Thankfully it was nowhere near as busy as I’d been led to believe; very pleasant.

Thanks for the multiple-use ticket, a bit of time was spent doing some hop-on, hop-off action along the canal to take in the atmosphere along the canal.  Authentic pizza for dinner then followed and that’s about it for Day 1.

Day 2’s morning highlight was the got-to-be-done gondola ride.  The stock price is €80 for 40 minutes and although some of the reviews would have you believe short-changing is the norm, I got my money’s worth – more so thanks to sharing with a small groups who were looking to do the same.  Many world cities have a reputation for being “expensive” and Venice is one of them.  However if you go into it with your eyes wide open to that fact, you can have an enjoyable time on a reasonable budget without feeling ripped off.  On the whole, that is.  I think I paid about €8 for an orange juice at one point – that does stretch the reality of my point a bit.

The gondola ride spent some time on the Grand Canal but I was more interested in the side canals – especially little corners of Venice which are out of the way.  The timing was great, with the sun shining through the small gaps at the end of these tall, narrow corridors of Venetian water.

The main “Venice bit” is just one part of the area around the big lagoon.  At the eastern end of the lagoon is Lido, the tall, thin island with a style all of its own.  I took a water bus there and explored the beaches and streets.  On the beach, it looked like the leisure facilities were getting ready for a big summer, with lots of renovation going on.  Just your basic cafe at the end of March though!

The evening was spent exploring the main historic Venetian city again, this time including sunset and night-time, where the area around Rialto bridge takes on a wonderfully different character and beauty, with the lights and their reflections in the canal bringing to life this whole other mood of the city.

Day 3 started off with some more exploring of the “city streets” but then my luck ran out with the weather and again, Venice took on another new character, with the loud noise of rain on everything and people scrambling to get to shelter.

Shopping and dining took over, followed by the journey home from this enchanting historic city, starting of course with that great trip over the causeway and then home in pretty much the same way I arrived.

We use cookies on our website to give you the most relevant experience by remembering your preferences and repeat visits. By clicking “Accept All”, you consent to the use of ALL the cookies. However, you may visit "Cookie Settings" to provide a controlled consent.
Cookie SettingsAccept All
Manage consent

This website uses cookies to improve your experience while you navigate through the website. Out of these, the cookies that are categorized as necessary are stored on your browser as they are essential for the working of basic functionalities of the website. We also use third-party cookies that help us analyze and understand how you use this website. These cookies will be stored in your browser only with your consent. You also have the option to opt-out of these cookies. But opting out of some of these cookies may affect your browsing experience.
Necessary Always Enabled
Necessary cookies are absolutely essential for the website to function properly. These cookies ensure basic functionalities and security features of the website, anonymously.
Functional
Functional cookies help to perform certain functionalities like sharing the content of the website on social media platforms, collect feedbacks, and other third-party features.
Performance
Performance cookies are used to understand and analyze the key performance indexes of the website which helps in delivering a better user experience for the visitors.
Analytics
Analytical cookies are used to understand how visitors interact with the website. These cookies help provide information on metrics the number of visitors, bounce rate, traffic source, etc.
Advertisement
Advertisement cookies are used to provide visitors with relevant ads and marketing campaigns. These cookies track visitors across websites and collect information to provide customized ads.
Others
Other uncategorized cookies are those that are being analyzed and have not been classified into a category as yet.
SAVE & ACCEPT